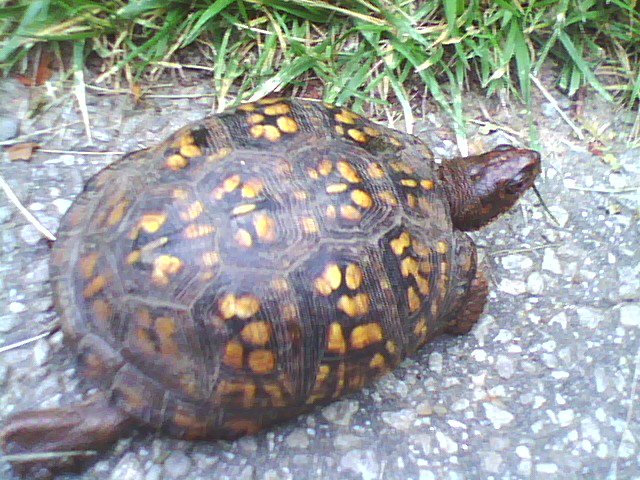 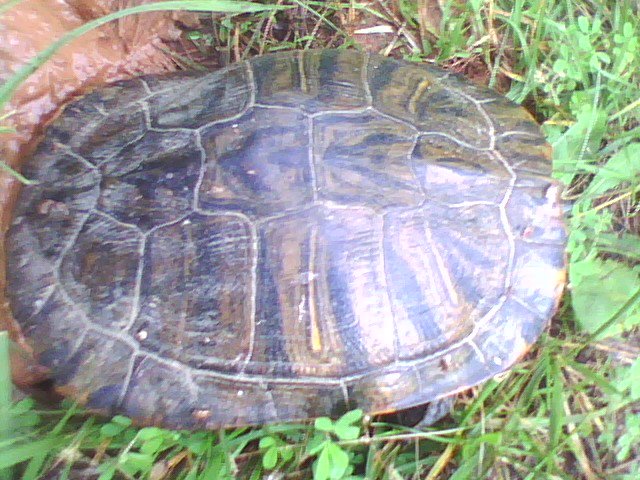 This last Monday I saw four turtles, the spotted ones being Eastern Box Turtles and the two bigger ones I believe being Wood Turtles but I’m not sure. The two bigger ones I believe are female because they were both kind of out in the open, sitting there kicking up dirt and mud with their hind legs which I’m fairly sure meant they were about to lay eggs. Both of the pictures show the kicked up mud and dirt behind them. All of them were way less shy then I would have thought. I’ve seen turtles run shy at the slightest sound from even thirty or more feet away. These, as you can see, let me get close enough to breathe down their back practically.  The first turtle didn’t even stop moving to duck his head in.

Monday was an especially fruitful day for animals. I saw two rabbits as well, two herons, and an owl. Wildlife galore. There are always tons of birds and geese too.

UPDATE: I sent the pictures to Sue Muller who is running the Herp project in Maryland to track turtles, frogs, toads, and salamanders and she got back to me and said that YES, the turtles I thought were Box Turtles are indeed Box Turtles but that the other two that I thought might be Wood Turtles are actually Red Eared Sliders. Pretty cool. Just wanted to update you on the identification.

For more information on Turtles in Maryland visit: http://www.dnr.state.md.us/wildlife/Plants_Wildlife/herps/Testudines/FieldGuide_OrderTestudines.asp